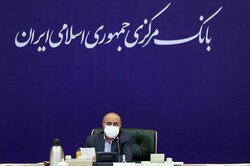 The Governor of the Central Bank of Iran (CBI) Akbar Komeijani has said the bank is going to take all the necessary measures for preventing the liquidity growth which will consequently lead to inflation, IRIB reported.

Speaking in a meeting with the managers of the country’s banking system on Tuesday, Komeijani pointed to the sanctions and the budget deficit as the main reasons for the liquidity growth in the country, saying that liquidity growth would lead to inflation and the decline in the value of the national currency which will, in turn, affect major medium- and long-term economic decisions in the country.

The official put the country’s liquidity growth in the 12-month period to June 21, at 39.4 percent, which shows an increase of 5.2 percent compared to the growth in the same period last year.
The main reason for this situation was the government's use of central bank resources which amounted to 560 trillion rials (about $13 billion), he stressed.

The CBI governor further noted that under the framework of the open market operations and in order to manage liquidity and guide the interbank interest rate, the Central Bank has taken necessary measures for attracting liquidity in this market since the second half of the Iranian calendar month of Khordad (early June).

The liquidity growth has been inevitable in Iran considering the outbreak of the coronavirus and the injection of liquidity by the government for supporting households and businesses.

Back in February, CBI had announced that the country’s liquidity reached 31.3 quadrillion rials (about $745.2 billion) in the first nine months of the previous Iranian calendar year (March 20-December 20, 2020), to register a 26.6-percent growth from the figure for the end of the preceding year.