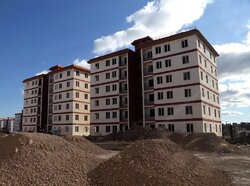 Deputy Head of Iran’s Mass Construction Association Iraj Rahbar has said the country’s contractors are capable of constructing one million housing units a year if the necessary funding and land is provided, IRNA reported.

The official noted that over the last three years, many efforts have been made to allocate the needed land for housing projects including the National Housing Action Plan to the Ministry of Transport and Urban Development, but the land has not been provided as needed.

Rahbar further stressed that there are different ways to attract financial resources for housing construction projects including the use of private sector potentials.

The official noted that private sector investors have huge resources that can be guided into mass construction projects if they are encouraged and appropriate incentives are considered by the government.

Earlier this month, Mahmoud Mahmoudzadeh, deputy transport, and urban development minister announced that planning has been made and preparations have been done to start constructing 1.3 million affordable housing units across the country.

Mahmoudzadeh said the required regulations have been prepared and facilities have been created to provide land for the mentioned housing units by the next government.
“With the measures taken, the conditions are more favorable for the new government to begin the work,” he noted.