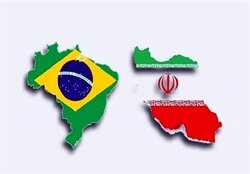 Iran and Brazil are considering expansion of cooperation in the mining sector, according to the Head of Iran Mine House (IMH) Mohammadreza Bahraman.

Mentioning a recent visit of a Brazilian delegation to the IMH, Bahraman noted that the two countries have great potentials for cooperation in the mining sector and mineral industries, especially in manufacturing machinery, IRNA reported.

According to Bahraman, the mentioned delegation was comprised of senior Brazilian officials including the president of Brazil’s Parliamentary Friendship Group, the Chairman of the Brazilian Mines Commission, as well as the country’s ambassador and commercial attaché in Tehran.

During the meeting, it was decided to prepare a memorandum of understanding for technical cooperation, supply of mining machinery, and attracting investment for both parties.
The MOU is expected to be signed in the near future, Bahraman said.

Accordingly, it was also decided to continue reciprocal meetings in Iran and Brazil with the presence of representatives of the governmental and parliamentary sectors of the two countries, as well as the two countries' private sectors, the official added.

“During the meeting, the Brazilian delegation presented a full report on the content of their activities and presented a review of the country's mining law with a look on foreign investment and the private sector,” he noted.

Bahraman further mentioned Brazil's significant mining activity, noting that more than 200,000 mines had been auctioned off in the country over the past year and that a low turnout had led to a change in Brazil’s mining law.

The IMH head also pointed to Brazil's high capacity to produce mining machinery and the extensive cooperation of its mining companies with major American, German and Japanese brands, which could be very beneficial for Iranian mining companies.