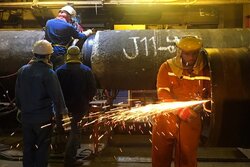 The construction of the offshore oil pipeline of the Jask crude oil export terminal has been completed, the operator of Jask oil terminal project in southern Iran announced.

According to Vahid Maleki, with the completion of the shore pooling operation of the sixth line of the terminal’s offshore pipeline which connects the terminal to its third single point mooring (SPM), the project’s pipeline was fully implemented and completed with a total length of 45 kilometers, the portal of Pars Oil and Gas Company (POGC) reported on Saturday.

The official noted that if the development plans for the terminal are pursued by the new government as scheduled, the second phase of the terminal’s development project can be implemented as soon as late September.

The construction of the Jask oil terminal’s second pipeline was started immediately after the completion of the first pipeline in late January.
As the country’s second major oil terminal, Jask terminal is under development by POGC on 60 hectares of land and with nearly €260 million of investment.

In line with the development of the mentioned oil terminal, a pipeline project, dubbed the Goreh-Jask oil transfer project, was also constructed. This project has provided Iran with an alternative route for the country’s crude oil exports that are currently carried out through the Strait of Hormuz.
In late July, Iranian President Hassan Rouhani officially ordered the inauguration of the strategic crude oil transfer project through which the country will bypass the Strait of Hurmuz and cut reliance on the chokepoint for its oil trades in the future.

According to the former Iranian Oil Minister Bijan Namdar Zanganeh, the new pipeline plays an important role in the Iranian oil industry as the country has officially commenced the export of crude oil from the Makran region.

The pipeline project has currently a capacity of transferring 300,000 bpd and this capacity will gradually increase to one million barrels in the near future.
Constructed with about $2 billion of investment, Goreh-Jask project also aims to ensure continued oil exports, decentralization of export terminals and diversification of oil export centers, sustainable development, and job creation on the shores of Makran.