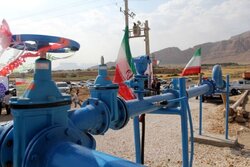 Some 41 development projects in different sectors including water, telecommunication, electricity supply and infrastructure were inaugurated on Saturday in Khorasan Razavi and Mazandaran provinces on the occasion of Government Week (August 24-30).

The telecommunication projects include launching and developing high-speed ADSL internet, developing telephone networks, and establishing fiber optic networks in rural areas.
Water and electricity supply to some rural areas in the mentioned provinces were also among the inaugurated projects.

Some electricity transmission lines, power stations, a fire station, and several other projects were also put into operation in the said provinces.
Every year, on the occasion of Government Week numerous development projects are inaugurated in various provinces across the country.

This year too, several development projects in different sectors including water, agriculture, infrastructure, industry, and electricity have gone operational across Iran.

Last week, Mehr News Agency quoted the Head of Golestan Province’s Regional Water Authority as saying that 36 water projects with a total investment of 140.9 billion rials (over $3.3 million) were set to go operational during the said week.