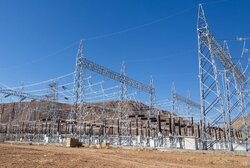 Higher level of installed [power plant] capacity compared to the actual generation, the existence of external problems such as reduced rainfall and non-standard conditions of power plants are three major problems in the electricity industry, Mehrabian said on Monday on the sidelines of a visit to Iran Grid Management Company.

“To solve these problems, we require a proper plan to increase the electricity generation with the same number of power plants in the coming years,” the minister stated.
“Unfortunately, in recent years, we have not been able to develop the power plant industry and add to the number of the country's power plants in proportion to the demand growth; in other words, supply is far behind demand, and today's demand is 13,000 megawatts more than production,” he added.

The minister noted that the Energy Ministry needs to define and implement new projects in collaboration with private sector investors, major electricity consumers like large-scale companies, and the government itself, to be able to meet the country’s electricity needs and prevent outages in the future.

According to Mehrabian, investing in renewable power plants will be one of the serious plans of the Energy Ministry in the coming years.
He underlined the management of supply and demand as another major issue that should be considered and said: “In consumption and demand management, we should use incentives instead of increasing prices; in such a way that consumers can manage their consumption and we would be able to return the resulting savings to the consumers.”

The energy minister announced the development of a practical and accurate plan for consumption management and noted: "We are currently preparing to develop this practical plan, which will be submitted to the government soon and, if necessary, we will send it to the parliament in the form of a bill."