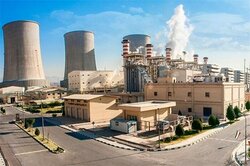 According to Hamidreza Azimi, the deputy managing director for planning affairs in TPPH, the mentioned capacity will be provided by 17 power plant units which will be constructed by the government and the private sector investment, Tasnim news agency reported.

Azimi also mentioned an agreement signed with the Industry, Mining and Trade Ministry, saying: “A memorandum of understanding (MOU) has been exchanged with the Industry Ministry for the construction of power plants for large-scale industries, according to which a permit for the construction of 10,536 MW of new power plants with an investment volume of six billion Euros has been issued.”

The official noted that according to the mentioned MOU, 13 power plants will be constructed in 12 different provinces including Isfahan, Hormozgan, Markazi, Yazd, Kerman, Fars, Semnan, and Khuzestan.
Back in July, Deputy Industry Minister Saeed Zarandi had announced the signing of an MOU with the Energy Ministry for constructing power plants for big industries.

“Since earlier this year, the Industry Ministry, on behalf of the industrial sector, started seeking a permit for building 13 power plants. We held several meetings with Tavanir [Iran's Power Generation, Distribution, and Transmission Company] and the Energy Ministry and proposed to sign a memorandum of understanding with the ministry. We also sent a letter to the Energy Ministry last week to expedite the issuance of the permit,” the official explained.

According to Zarandi, the mentioned power plants are financed by 12 investors from various industrial sectors and will be constructed within 2.5-3 years.
One of the main goals of this program is to provide reliable and sustainable electricity to high-consuming industries and the country’s industrial parks in order to reduce the pressure imposed on the national grid in the industry and mining sector, according to Zarandi.

“If these power plants are built, a significant load will be removed from the national electricity distribution network,” he stressed.
The official further noted that in case of any surplus electricity generation, the industrial units can sell the surplus electricity to the Energy Ministry.

‘Supplying fuel to power plants during winter should be a priority'