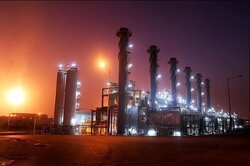 Speaking to the press on the sidelines of a visit to the South Pars complex in Assalouyeh on Friday, Oji mentioned the South Pars Phase 14 Refinery as the last refinery of the complex to go operational and said: "our colleagues have promised that the first train of the refinery will be put into operation this winter and will add gas to the country's network."

As Shana reported, the minister underlined the significant role of the South Pars complex in supplying the country’s natural gas needs and noted that 70 percent of the country’s gas needs are met by South Pars.
Oji expressed hope that with the decisions taken this year, the maximum production and extraction of gas from the South Pars joint field will be achieved.

Back in October 2020, the operator of the South Pars Phase 14 development project had said the project’s onshore refinery was scheduled to be fully operational by the first half of the current Iranian calendar year (September 2021), however, the coronavirus pandemic caused some delay in the project.