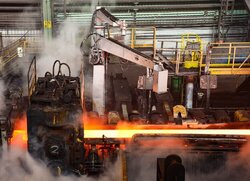 Production of crude steel in Iran reached 17.8 million tons during January-July, 2021 to register a 9.9 percent growth year on year, according to the latest report released by the World Steel Association (WSA).

The Islamic Republic maintained its place as the world’s 10th biggest steel producer during the mentioned time span, the report said.
Producing 649.3 million and 68 million tons of the product, China and India stood at the first and second places in the said period, respectively, while Japan stood at third place producing 56 million tons of crude steel.

The Iranian Steel industry has been constantly developing over the past years against all the pressures and obstacles created by outside forces like the U.S. sanctions and the coronavirus outbreak that has severely affected the performance of the world’s top producers.
The country is expected to climb to seventh place among the world’s top steel producers by the Iranian calendar year 1404 (March 2025).