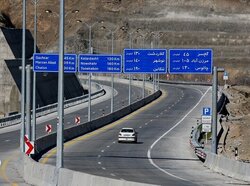 Iranian Deputy Transport and Urban Development Minister Kheirollah Khademi has said that 45 trillion rials (about $1.07 billion) is needed for improving 10 major freeways across the country in the next two years, IRNA reported.

Khademi made the remarks in a meeting attended by deputies of the Transport Ministry, and managers of organizations active in the road construction field to discuss various aspects of a program for improving the country’s road network.

“Qom-Kashan, Qazvin-Rasht, Zanjan-Tabriz, Qazvin-Zanjan, and Kashan-Natanz-Isfahan freeways are the first priorities and about 45 trillion rials of credit is needed to improve these freeways,” the official said.
Transport and Urban Development Minister Rostam Qassemi has recently announced the planning for improving the condition of the major freeways and highways and expanding the country’s freeways network to 10,000 kilometers.

Further in the meeting, Khademi, who is also the managing director of Iran's Construction and Development of Transportation Infrastructures Company (CDTIC), emphasized the need for accelerating the improvement of the country's freeways, saying: “According to existing standards, three to six percent of the daily revenues of each freeway should be spent on its improvement and maintenance, but now 15 percent of freeway revenues are spent on maintenance, which should be used to reduce maintenance costs by using new methods in paving freeways.”

In our program for improvement 10 freeways have been prioritized, on which the operations will be done over a six-year period, the official explained.

He announced the construction of new freeway corridors as another part of his ministry’s programs for the coming years and said: “Considering the importance of developing the transportation network in the east and south for connecting Chabahar to the center and north of Afghanistan and Tajikistan through the freeway network, this section is considered a top priority.”

“In our planning for the construction of new freeway corridors, reducing traffic, the establishment of population centers, ecotourism in transit areas and the development of the country's transit network are priorities,” Khademi said.