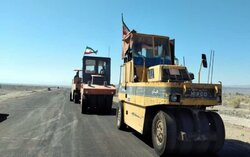 As announced by a provincial official, 50 kilometers of highways will be inaugurated in Iran’s southeastern Sistan-Baluchestan province by the end of current Iranian calendar year (March 20, 2022).

Ataollah Akbari, the director-general of the province’s Transport and Urban Development Department, said, “With rare events in the last two years, we have witnessed a leap in the construction of highways in the province, so that 147 km of highways are currently under construction in the area covered by this department, 50 km of which will be operational by the end of this year.”

Saying that more than 3,000 people work in 25 road construction workshops in Sistan-Baluchestan, the official sated that the construction of communication routes, especially highways, is one of the most important indicators of the development of different regions and improves economic and trade relations along with increasing the safety of passenger traffic.

He further announced that construction of 90 kilometers of highways in the province is planned for the next Iranian calendar year.
Back in May, Deputy Transport and Urban Development Minister Kheirollah Khademi had said that 440 kilometers (km) of freeways and 1,200 km of highways will be added to the country’s road network by the end of the current Iranian calendar year.

Kheirollah Khademi, who is also the managing director of Iran's Construction and Development of Transportation Infrastructures Company (CDTIC), noted that the ministry prioritized the completion of nine major freeway projects which would have the biggest impact on the country’s transportation and transit operations over the past two years and these projects have had average progress of more than 70 percent so far.

He stressed that the completion of 221 km of freeways in the previous year was achieved despite the fact that the annual freeway construction in the country has been 80 km.
Meanwhile on August 2, the former Transport and Urban Development Minister Mohammad Eslami had announced that the country’s length of freeway network would be increased to 3,100 kilometers in the coming weeks.

Noting that 90 percent of the country's freight and passenger traffic is carried out through the highways network, he said: "In order to be able to balance the needs [with the current infrastructure], we must have 35,000 kilometers of highways across the country."
According to Khademi, the construction of the mentioned ways requires 1.2 quadrillion rials (about $28.5 billion) of investment.

The official noted that if about 850 to 1000 kilometers of highways or freeways are constructed every year, it will take 12 to 13 years for the mentioned goal to be realized.
He called on the government to accelerate the completion of transportation projects across the country.