Over $2.2b of foreign investment approved in industrial, mining sectors in H1 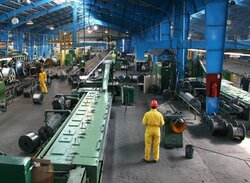 The Ministry of Industry, Mining and Trade has approved 74 foreign investment projects valued at about $2.227 billion in the first six months of the current Iranian calendar year (March 21-September 22), IRNA reported.

According to the latest data released by the ministry, a total of 113 foreign investment projects valued at $2.614 billion were approved in the country during the mentioned period, of which the share of the industry, mining, and trade sector was 65 percent and 85 percent in terms of number and value, respectively.

The highest volume of foreign investment approved in the industry, mining, and trade sectors in the period under review were in the categories of chemical materials, base metals, radio, television and communication equipment, and tobacco-related products.

Ghana, the United Arab Emirates, Afghanistan, the Netherlands, and Germany were the top five countries with the highest volume of investment, while, Khuzestan, Sistan-Baluchestan, Kerman, Zanjan, Markazi, and East Azarbaijan were the top five provinces in terms of the volume of approved foreign investment.

Afghanistan, Turkey, China, the UAE, and Germany were also the top five investors in terms of the number of approved projects during the said time span.