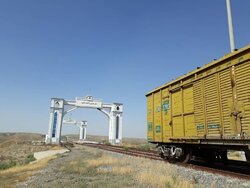 Iranian Transport and Urban Development Minister Rostam Qasemi said on Sunday that positive agreements have been reached with neighboring countries, for expansion of transportation cooperation, especially in the aviation sector, IRNA reported.

Speaking in the ceremony on introducing the new head of Civil Aviation Organization (CAO), Qasemi said: “We recently reached agreements with Turkmenistan and Kyrgyzstan, part of which is related to the development of aviation.”

“We have made plans for upgrading our transportation fleet; however, we need effective measures to be taken for the development of the aviation industry,” he stressed.

Elsewhere in his remarks, Qasemi mentioned the needs of other transportation sectors including road, maritime, and rail, and said: “The transport sector needs to modernize its fleet, and we have not yet achieved the goals of the program in the rail, sea, and land sectors.”

Ghasemi pointed to the existing problems in the railway fleet and also the incompleteness of the country’s railway corridors and said: "Conditions in the railway sector are not favorable, the average life of the road transportation fleet is high and in the sea sector, despite high capacities, the capacity of the country’s ports has not been used well."