IMIDRO Plans to Integrate Steel Chain from Mine to Industry 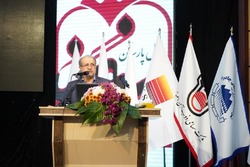 IMIDRO strengthens the downstream chain as the leading sector, with the aim of maintaining the upstream steel sector, chairman of the board of IMIDRO announced.

According to the report of public relations of IMIDRO, IMIDRO and Industry, Mine and Trade Ministry are working on an integrated vision from mining to industry, Vajiholah Jafari declared at the 8th Steel Price Conference.

“We are doing exploration activities in 132 zones of 30 provinces across the 650,000 square kilometers of the country. Considering the country’s industry need to raw materials, we plans to do deep exploration program”, he added.
Iron Ore Reserves Increase

He also referring the infrastructure sector and continued: “infrastructure development in electricity, water, gas and road sectors has an important role in production capacity growth. Recently, an MoU signed by Industry, Mine and Trade Ministry and Energy Ministry on construction of 10,000MW new power plant capacity in Industry and mine sector which is in contract phase by participation of leading mining and mining industries companies.

Pointing the clarification in steel exchanges Jafari announced: presentation of all products in the chain such as raw materials in stock exchange is a way for clarification the exchanges.