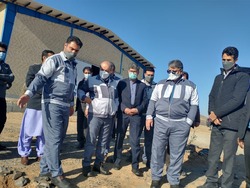 Chairman of the board of IMIDRO announced that 155 potential exploration areas have been identified by IMIDRO in Sistan and Baluchestan province.

According to the report of Public relations of IMIDRO, Sistan and Baluchestan and South Khorasan provinces are IMIDRO’s exploration priorities, Chairman of the board of IMIDRO Vajiholah Jafari emphasized.

IMIDRO is conducting exploration activities with the aim of investors’ risk reduction and facilitating the investment attraction, he continued regarding IMIDRO’s governance measures.

He added that out of 480,000 square kilometers of IMIDRO’s exploration activities (along with IMPASCO) in 30 provinces, the share of Sistan and Balushestan province is 110,000 square kilometers.
Jafari declared:” activities will continue in these areas with priority on metal minerals until achieving to reserves, then with the legal methods, the opportunities will be provided for participation of private sector.”

After monitoring, 7 potential areas in the north of the province have been selected and their general exploration phase has been completed which are prone to copper, gold and iron ore reserves, he emphasized.

He continued: now, we have applied for chromite exploration license and we are waiting for it.
Deputy of Mine, Industry and trade minister noted that IMIDRO is involved in projects that the private sector is not willing to operate or their risk is high.