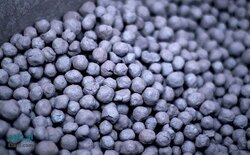 According to the report of public relations of IMIDRO, pellet production of major Iranian iron ore companies stood at 28,649,256 tons during the first nine months of the current Iranian year (March21_December21, 2021) indicating a 23 percent rise compared with the corresponding period of the last year.

These companies had a total production of 3,026,464 tons of pellets in the ninth month of the current Iranian year known as Azar (ended December21, 2021), indicating a 17 percent growth YOY.