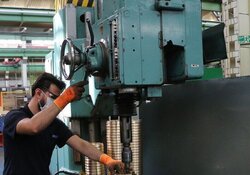 The head of Iran Small Industries and Industrial Parks Organization (ISIPO) said that reviving the idle production units is a main approach of the government in the industry sector.

The government, with the help of the private sector and enterprises, is seriously pursuing the solution of the problems of production units, and very good planning has been done in this regard, Ali Rasoulian stressed.

He mentioned two important and priority programs of the Ministry of Industry, Mining and Trade in relation to industrial parks as providing infrastructure and supporting small businesses and enterprises, and said that 2,023 projects related to providing infrastructure of industrial parks in the country, including water, electricity and gas supply, with 60 trillion rials (about $230.7 million) of credit is underway in different parts of the country.

The ISIPO head also announced that 390 infrastructure projects worth 11.4 trillion rials (about $43.8 million) were inaugurated during the Ten-Day Dawn (February1-11) celebrations, which marked the 43rd anniversary of the Islamic Revolution, and many other projects will be put into operation by the yearend.

He further mentioned the establishment of small and medium-sized workshops throughout the country as another priority of the Ministry of Industry, Mining and Trade.
The official has recently announced that 1,717 idle industrial units have been revived in the industrial parks and zones of the country since the beginning of current Iranian calendar year (March 21, 2021).

Rasoulian said the figure is hoped to reach 2,000 units by the end of the present year.
Putting the number of idle units in the industrial parks and zones at 12,067 at the moment, the official said that 62 percent of these units can be revived.
The number of idle units has dropped 18 percent in the current year, he added.

The ISIPO head has previously announced that 1,557 stagnant and semi-active units returned to the production cycle in the industrial parks with a financing of 35 trillion rials (nearly $130 million), providing employment for 27,000 people, in the last Iranian calendar year.

With the aim of reactivating stagnant units or units that are operating below capacity, 900 consultants from the private sector and knowledge-based companies were selected in the form of industry clinics across the country to recognize the weaknesses of these units, Rasoulian stated.

“Despite the two major challenges of sanctions and coronavirus pandemic, which imposed severe restrictions on the country, we tried to activate domestic capacities by turning to localizing the technology of manufacturing parts and equipment”, he added.

Sanctions have caused problems for financial exchanges and the export of goods to other countries, he said, adding, “The negative effects of coronavirus pandemic on various parts of the country, including industry, are not hidden from anyone, and the economic growth of some countries has reached below zero during this period.”

Iran is proud that despite these restrictions and pressure from these two important challenges, its industry has grown by more than seven percent, according to the statistics and reports from various sectors, the official further highlighted.

Also, as announced by Deputy Industry, Mining, and Trade Minister Mehdi Sadeqi Niaraki, over 6,500 new industrial units were established across the country during the past year which created jobs for over 121,000 people.

Touching upon the Industry Ministry’s plans for the realization of the motto of the current year which is named the year of “Production: support and the elimination of obstacles” by the Leader of the Islamic Revolution, the official has said: “In the year that has been dedicated to the production sector by the Leader of the revolution, the orientation of all government organizations and executive bodies should be towards supporting the country’s industrial and mining units.”

Niaraki pointed to a 40-percent increase in the issuance of establishment licenses for industrial units in the previous year, saying: “The number of establishment licenses increased to more than 36,000 last year, which shows that people are encouraged to invest in the productive sectors.”
He also mentioned an 85-percent rise in the allocation of land for establishing industrial units across the country and noted that over 4,500 hectares of land were handed over to applicants in the previous calendar year.