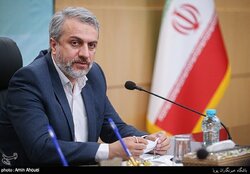 All directors of Industry, Mining and Trade Ministry in any part of the country are responsible for their field of work in matters related to business and must actively and consistently seek to remove barriers to production and trade, Reza Fatemi-Amin further reiterated.

In providing infrastructure related to industry, mining and trade, all possible capacities must be activated and it is necessary to continuously monitor the status of industrial units, he added.
In late March, the minister had announced that the regional planning for the industry and trade sectors of the country is prepared by his ministry in accordance with the capacities of each province and to prevent the concentration of industrial units in one region.
Since the concentration of different industries in some provinces of the country has become problematic, so the regional planning for industry and trade has been developed by this ministry to create and launch industrial units in accordance with the needs of each region and province, he reiterated.

According to this planning, the industrial and commercial capacities of each province are identified and in accordance with those capacities, industrial units are created in that region, so that in addition to job creation, the concentration of industrial and commercial units not related to the mentioned region is prevented, the minister added.
By identifying the capacities of each province in the industry and trade sector, investors appropriate to that industry are encouraged to invest in that region and province, Fatemi-Amin noted.