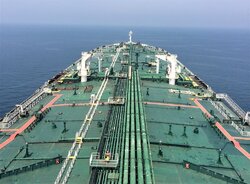 Praising the performance of the NITC fleet for increasing the country’s exports of oil and oil products, Mohsen Khojasteh-Mehr said: “This success (increased sales of oil and gas condensate) came at a time when the sanction conditions have become even stricter.”

“Oil export is the result of a long chain of activities in various sectors including exploration, development, production, and transportation and our dear colleagues at the National Iranian Oil Company have contributed greatly to realizing this goal,” Khojasteh-Mehr said.

The performance of the National Iranian Tanker Company and the round-the-clock efforts of the sailors of the company's fleet in transporting oil and oil products have been at the center of attention of the country's authorities over the past few months, as it has also been appreciated by the Oil Minister Javad Oji and other members of the cabinet.

Back in March, Oji praised the performance of National Iranian Tanker Company Head Hossein Shiva in a cabinet meeting.
The minister admired the actions and performance of the NITC in supporting and helping to continue the export of oil and oil products.

Also, in an interview conducted by IRNA in late February, the minister of cooperatives, labor and, social welfare had said the shipments of crude oil and oil products by the fleet of the National Iranian Tanker Company have increased significantly over the past few months.
Hojatollah Abdolmaleki praised the performance of the NITC head and noted that transportation and export of crude oil and petroleum products by the company’s fleet have witnessed a serious leap in the mentioned period.