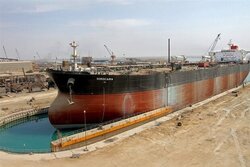 Managing Director of Islamic Republic of Iran Shipping Lines (IRISL) Mohammadreza Modares-Khiabani has underlined the significance of self-sufficiency in the development of the country’s maritime fleet and said IRISL is going to seriously pursue building new vessels in the current Iranian calendar year (started on March 21).

Speaking in a meeting with IRISL’s senior managers, Modares-Khiabani underlined supporting the construction of vessels and container ships by domestic manufacturers as one of the main strategies that the IRISL is going to pursue in the current year, Mehr News Agency reported on Monday.
“IRISL has begun a serious movement in the field of vessel construction using domestic capabilities, which will continue in the current year with more strength and vigor,” he said.

Emphasizing the need for providing opportunities for growth and prosperity during the sanctions and international crisis, the official said: "Although sanctions have created difficult conditions for various sectors of the Iranian economy the country has been able to overcome the pressures by relying on domestic capabilities.”

Modares-Khiabani further underlined the importance of human resources and asset management by the IRISL, saying: “Last year, historical records were achieved by the Islamic Republic of Iran Shipping Lines; however, the continuation of this trend must be accompanied by great strides in the development of the fleet so that new records can be set in this area as well.”
“Special attention to the north-south corridor and the strong presence of the shipping fleet of the Islamic Republic of Iran in the port of Chabahar is also among the IRISL’s main strategies in the current year,” he added.

The IRISL head also mentioned his organization’s special efforts for repairing the vessels of the IRISL fleet inside the country and said: "There is a serious approach to conduct the periodic repairs of ships inside the country and so far, effective steps have been taken in this area."
“At the same time, there is a serious emphasis on supplying all the data-x-items and parts needed by the vessels by domestic manufacturers,” the official added.