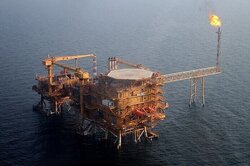 Iranian Oil Minister Javad Oji said his ministry has started output enhancement operations in some of the country’s gas fields to supply more gas to the country’s refineries, Shana reported on Tuesday.

According to the official, increasing the output of the gas fields is aimed at supplying the necessary feedstock for the country’s gas refineries to be able to operate at full capacity.
Considering the empty capacities in the country's gas refineries, two approaches are being followed; First, implementation of output enhancement operations at the existing gas fields, and second, development of new gas fields and the delivery of the produced gas to existing refineries, Oji said.
Announcing the inauguration of the country’s first electrical submersible pumps (ESP) factory in Khuzestan Province, Oji also said that new recovery enhancement projects are going to be awarded to domestic knowledge-based companies.

According to the official, the Oil Ministry plans to complete the development plans of all offshore and onshore fields across the country by the end of the current government’s incumbency (August 2024).

“The completion of the development projects of joint fields is one of the most important programs that the ministry is pursuing,” Oji stressed.

The official further mentioned financing of major oil and gas projects as one of the most important issues in the development of fields, saying: “Oil and gas projects need a lot of investment, so a new method that we are using to fund such projects is to merge holdings, banks, and large companies in the form of a consortium so that several large holdings or banks can jointly finance one major project in the country.”

"This approach is being implemented and we will use this method both in the development of fields and in the oil industry’s downstream development projects," Oji added.

He further announced that the National Iranian Oil Company (NIOC) is planning to award some enhanced oil recovery (EOR) projects to domestic knowledge-based companies.
Referring to the motto of the current year, which is “Production: Knowledge-Based and Employment-Creating” the official said: "The Oil Ministry uses the capacities of knowledge-based companies in increasing the output of the country’s offshore, onshore, and joint fields.”