More than 1.7m tons of commodities traded at IME in a week 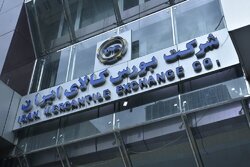 During the past Iranian calendar week (ended on Friday), 1.716 million tons of commodities worth more than $552 million were traded at Iran Mercantile Exchange (IME).

Last was the IME's side market on which the exchange traded 110,781 tons commodities.
As previously reported, the value of trades at Iran Mercantile Exchange rose 102 percent, and the volume of trades at the exchange increased 128 percent in the past Iranian calendar year 1400 (ended on March 20), which was the highest level of growth in the history of the exchange since its establishment.