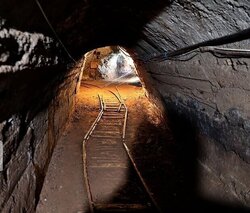 As announced by a provincial official, 25 idle mines were revived in Zanjan province in the past Iranian calendar year 1400 (ended on March 20).

Naser Faghfouri, the head of the province’s Industry, Mining and Trade Department, said that 355 mines are already active in Zanjan province, of them over 12 million tons of minerals is annually extracted.

He said that 2,978 persons are working in the mines of the province at the present.
Of the total 355 mines of the province, 134 mines are in Zanjan county, of them over three million tons of minerals is annually extracted, the official further stated.
According to the data released by Iranian Mines and Mining Industries Development and Renovation Organization (IMIDRO), 453 idle small-scale mines have been revived throughout the country in the previous Iranian calendar year.

Based on the IMIDRO data, the revived mines in the previous year created jobs for over 3,000 people and increased the country’s mineral output by 22.5 million tons.
The total number of revived mines has reached 852 since the launch of the Industry, Mining and Trade Ministry’s program for reviving small mines across the country, in late March 2019. The revived mines in this program have created job opportunities for over 13,000 people in the mentioned period.
The most important goal of this program, which is being implemented by IMIDRO, is to activate the country's mines, which will result in increased production and employment, especially in deprived areas.

Back in December 2021, Reza Azimi, who directs the ministry’s program for reviving and developing small mines, had mentioned concluding 37 memorandums of understanding (MOU) for investment, and scientific-research cooperation with knowledge-based companies, as well as the introduction of 124 projects to Mining Investment Insurance Corporation for receiving facilities, and the support and coaching of knowledge-based companies and startups as other measures taken under the framework of the mentioned program.
As reported, IMIDRO is conducting the program with the aim of providing feedstock for mineral industries, increasing production and completing the mining industry’s product chain, and developing and creating sustainable employment.

Following this program, so far various small-scale mines including chromite, manganese, hematite, dolomite, iron ore, copper, and construction stone mines have been surveyed by monitoring and diagnosing the problems of the mines and providing solutions for resolving their issues.
Over the past few years with new resilient economy strategies coming into play, the mining sector has become a major point of focus for the Iranian government and various organizations and bodies active in this sector have been tasked to implement new programs for boosting this sector.
As a major state-owned holding company active in the mining sector in the country, IMIDRO has been playing a significant part in the mentioned planning.
The organization has been implementing several new programs in all the main fields of the mining industry including exploration, machinery development, extraction and also reviving the country’s idle mines.