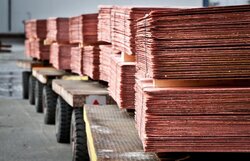 The value of Iran’s export of copper cathode rose 116 percent in the past Iranian calendar year 1400 (ended on March 20), as compared to its previous year, Omid Qalibaf, the spokesman of Industry, Mining and Trade Ministry, announced.

In early May, Head of Iran Copper Association Bahram Shakouri said the country is going to increase its copper cathode production from the current 300,000 tons to one million tons by the Iranian calendar year 1404 (starts on March 21, 2025).

“Although less than 300,000 tons of copper cathodes are currently produced in the country, with the development of reserves and more exploration and extraction, the production of one million tons of the product is projected by 1404,” Shakouri stated.

“For the 1404 horizon, production of 800,000 tons of copper is targeted, and if we develop mineral reserves and expand exploration operations while creating more processing plants, the production ceiling of one million tons of copper cathode can be considered for the mentioned year,” he explained.
Referring to the global target for copper production in 2050, the official added: "According to forecasts, copper production in the world by 2050 should reach four times the current level which is over 1.8 million tons.”

Being located on the Alpine-Himalayan orogenic belt, of which about 12.5 percent is located in Iran, the country should contribute greatly to the fourfold increase in the world’s copper production by 2050, Shakouri said.

Stressing the need for planning to increase Iran's share in the world’s copper production, he added: "To increase our share in the global copper production in the 2050 horizon, we must develop both exploration and extraction and discover new world-class reserves.”
According to the official, Iran Copper Association is currently leading the country’s copper exploration programs in collaboration with the private sector.

“New copper mines recently discovered in Sistan-Baluchestan Province (in the southeast of the country) have been the result of such efforts,” he said.

Shakouri stressed that the mining sector, especially in the field of copper, has a bright future considering the elimination of fossil fuels and the movement towards new technologies, saying: “If the country’s mining capacities in the copper field are realized, given the rising global prices for the mentioned product, at least $10 billion of revenues could be generated for the country, along with creating more employment and production which ensures the development of deprived regions.”
The official noted that currently, most of the country’s copper cathode production is exported due to the underdevelopment of downstream industries.

"The government should support downstream industries, including wire and cable production units, and provide incentives to other high-tech industries that use copper products,” Shakouri stressed.

Commodities worth $589m traded at IME in a week