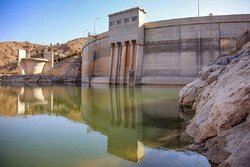 The total volume of water in Iranian dam reservoirs is estimated at about 26.89 billion cubic meters since the beginning of the current water year (September 23, 2021), showing a five percent decline compared to the same period last year.

The precipitation rate during autumn (September 23-December 21, 2021) was not very favorable, as the Meteorological Organization has considered this autumn one of the driest seasons in the past 50 years.
But the situation has improved a bit during the winter, with relatively good rainfall in the country.
The total volume of water input to the country's dams since the beginning of the current water year is reported to be 16.13 billion cubic meters, which shows an increase of two percent compared to the same period last year.

The latest report from the National Drought Warning and Monitoring Center showed a four percent increase in rainfall in comparison with the long-term average.
Iran’s total dam reservoirs stand at 50.5 billion cubic meters.
Out of a total of 183 currently operational dams across Iran, 52 are related to the Caspian Sea catchment area, 12 are based in the Urmia basin, 68 dams are located in the Persian Gulf and the Gulf of Oman watersheds, 34 dams are in the Central Plateau, 11 dams are in Sarakhs catchment basin, and another six dams are located across the eastern boundary basin (Hamoun).

A recent report by Nature Scientific Journal on Iran’s water crisis indicates that from 2002 to 2015, over 74 billion cubic meters have been extracted from aquifers, which is unprecedented and its revival takes thousands of years along with urgent action.
Three Iranian scientists studied 30 basins in the country and realized that the rate of aquifer depletion over a 14-year period has been about 74 billion cubic meters, which is recently published in Nature Scientific Journal.

Also, over-harvesting in 77 percent of Iran has led to more land subsidence and soil salinity. Research and statistics show that the average overdraft from the country's aquifers was about 5.2 billion cubic meters per year.