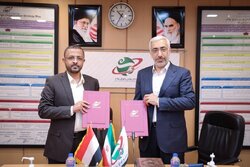 Iran’s Securities and Exchange Organization (SEO) has signed a memorandum of understanding (MOU) with the Central Bank of Yemen to exchange knowledge and infrastructure required for the development of stock exchange activities in both countries.

As reported by the capital market news portal (Sena), the MOU was signed by SEO Head Majid Eshqi and Governor of the Central Bank of Yemen Hashem Ismail in Tehran on Monday.

Speaking at the signing ceremony, Eshqi pointed to the conclusion of this memorandum as a very positive step for expanding cooperation between the two sides and expressed hope that the relations between the two countries in the field of creating financial markets will increase more than before.
Ismail for his part underlined Iran's experiences in creating financial markets and expressed hope that by concluding this MOU, new paths will be created for more cooperation between the two countries in various fields.

One of the main provisions of this memorandum is providing the necessary infrastructure for the establishment of Yemen’s capital market, for which Iran has announced its readiness to provide consulting, technical, and structural services.