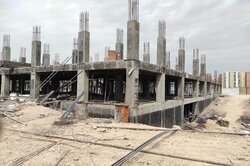 As announced by a provincial official, 4,000 units of National Housing Movement plan are currently under construction in West Azarbaijan province, in the northwest of Iran.

Mohsen Hamzelou, the director-general of the province’s Transport and Urban Development Department, said that 45,000 applicants are qualified to receive the facilities and services of the mentioned plan in the province.
As announced by the deputy transport and urban development minister, the first phase of National Housing Movement will be inaugurated in the next Iranian calendar month Shahrivar (begins on August 23).
Mahmoud Mahmoudzadeh made the remarks while also announcing the supply of 90 percent of the required land.

Based on the planning, in the first stage, about 100,000 units will be delivered to the people who participated in the project earlier and deposited their initial contribution, he stated.
The projects will be inaugurated in many provinces including Yazd, Kerman, and South Khorasan, the official said.
On June 11, Transport and Urban Development Minister Rostam Qasemi had said, “With the support of the parliament and the credit provided for the facilities of National Housing Movement, we will proceed according to the schedule”.
After National Housing Action Plan (started in 2018), National Housing Movement is the government’s second major program to provide affordable housing units for the low-income classes.
The operation for the construction of 209,212 residential units of National Housing Movement began in early February.