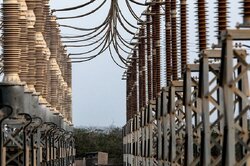 Earlier this year, the Iranian Energy Ministry announced a program based on which the country’s major industries would construct 10,000 megawatts (MW) capacity power plants across the country to meet their own electricity demand during peak consumption periods.
According to Zaman Hosseini, the first of the mentioned power plant units, with a capacity of 183 MW, has been added to the Semnan power plant and put into operation by the mining sector, IRNA reported.

“Semnan power plant now has three gas units each with a capacity of 183 MW, the executive operation of the second phase of its development which includes unit 4 has also started,” the official said.
The official noted that based on the Energy Ministry’s program, first the industries were supposed to build 10,000 MW capacity of power plants, however, now more sectors have stepped up and 16,500 MW of new power plant units are going to be constructed based on the mentioned program.
In July 2021, the Iranian Industry, Mining, and Trade Ministry signed a memorandum of understanding (MOU) with the Energy Ministry for constructing power plants for big industries.

Later in November of that year, Energy Minister Ali-Akbar Mehrabian announced that the construction of 10,000 MW capacity power plants was started by various industrial sectors, saying: “four major industries have started their work in the field of power plant construction. Based on the contract concluded with these industries, the said industries will not be provided with electricity from the national grid if they cannot deliver the power plants based on the specified schedule.”

Over the past decade, constant temperature rising and the significant decrease in rainfalls across Iran have put the country in a hard situation regarding electricity supply during peak consumption periods.
In this regard, the Energy Ministry has been following new programs to meet the country’s power demand during peak periods and to prevent outages.
Constructing new units in the country’s power plants and also building new power plants for major industries are among the mentioned programs that are being pursued seriously by the ministry in collaboration with other related government entities.