Commodities worth over $420m exported from Isfahan province in 4 months 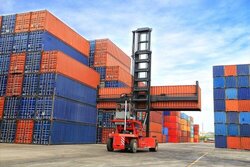 Commodities valued at $421.899 million were exported from Isfahan province in the first four months of the current Iranian calendar year (March 21-July 22), the director-general of the province’s customs department announced.

Kouhestani-Pajouh also announced that commodities worth $200.831 million have been imported to the province in the first four months of the present year.
As previously announced by the official, the value of export from Isfahan province rose 56 percent in the past Iranian calendar year (ended on March 20), as compared to its previous year.
He said that 2.151 million tons of products worth $1.355 billion were exported from the province in the past year, indicating also 14 percent growth in terms of weight.
He named iron and steel, petrochemicals, carpets, and dairy products as the major data-x-items exported from the province, and Iraq, Pakistan, Afghanistan, Turkey, and Armenia as the major export destinations in the previous year.