Civil aviation fleet to have 550 airplanes in 10 years 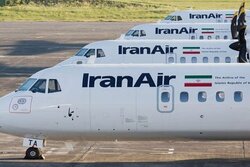 Head of Iran’s Civil Aviation Organization (CAO) said on Wednesday his organization is implementing a comprehensive program based on which the number of the country’s passenger airplanes will increase to 550 within the next 10 years, IRNA reported.

Speaking in a meeting with the country’s senior aviation officials on the occasion of Government Week, Mohammad Mohammadi-Bakhsh said: “Under the framework of this program, fleet expansion up to 550 airplanes, repairing airplane parts and indigenizing the knowledge for the construction of aircraft inside the country are set on the agenda.”

“Following President Raisi's orders, we have focused all our efforts on a few areas, including buying airplanes, manufacturing airplanes, and repairing grounded airplanes. We need 550 airplanes to meet the country’s air transportation demands,” Mohammadi-Bakhsh said.
According to the official, based on the said program, the government has allowed the private sector to purchase small-scale airplanes and operate them as part of the country’s civil aviation fleet.

Defense, Transport and Urban Development as well as Industry, Mining and Trade,” he explained.
The official further noted that a consortium of Russian, Chinese and Indian companies has been formed to participate in the organization’s overhaul programs.
Having the oldest airline in West Asia and the second oldest in Asia, Iran started developing its aviation industry nearly 80 years ago and this industry is still improving in the country, however, despite its long history general aviation (GA) in Iran has been almost completely neglected.