Commodities worth $2.2b traded at IME in a month 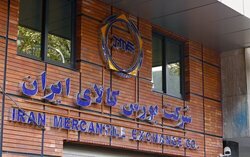 During the past Iranian calendar month Mordad (ended on August 22), 10.311 million tons of commodities worth $2.2 billion were traded at Iran Mercantile Exchange (IME).

As reported by the IME’s Public Relations and International Affairs Department, the exchange traded on both domestic and export rings of its oil and petrochemical trading floor 1.827 million tons of commodities valued at more than $864 million.