1b tons of new copper reserves discovered in Iran 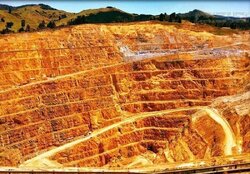 The managing director of National Iranian Copper Industries Company (NICIC) has announced the discovery of one billion tons of new copper reserves in Iran, IRIB reported.

NICIC carried out 28,000 meters of deep drilling to identify new copper reserves in East Azarbaijan’s Sungun copper mine which resulted in the discovery of one billion tons of new reserves, Ali Rostami said on Sunday.

He put the value of the discovered reserves at over $50 billion, saying that the company is taking the necessary measures to begin executing development operations in the said mine.

Rostami stated that with the identification of these new reserves, the resources of the Sungun mine have grown by more than 25 percent, adding: “A one-billion-ton increase in resources is unique in its kind and is considered a huge discovery, although estimates show that the mine’s reserves maybe even more than what we have already discovered.”

Back in April 2021, NICIC’s former Managing Director Ardeshir Sa'd-Mohammadi announced the discovery of yet another one billion of new copper reserves across the country.

Having 81 different types of minerals, Iran is one of the top 10 mineral-rich countries across the globe. In this regard, the Iranian government has been seriously pursuing several programs for promoting the mining sector as a major contributor to the country’s economic growth.