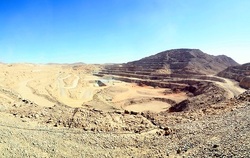 He noted that only 5 to 10 percent of these new reserves will added $27 billion to the value of the country’s mineral reserves.

IMIDRO is authorized to perform exploration operations in deprived provinces based on the mining law, he added.

Due to the geographical location of deprived provinces, we are conducting exploration operations in Sistan and Bluchistan and South Khorasan provinces in border lines area (Saravan, Zahedan and Sefidabeh), as well as West Azerbaijan, Kurdistan, Kermanshah and Ilam provinces, Fatahi continued.

After conducting the identification phase, over 283 promising areas were registered. Also,147 exploration licenses and 16 discovery certificates have been issued.