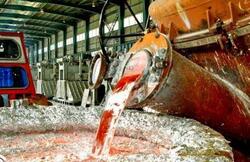 According to the report of public relations of IMIDRO, four major Iranian aluminum companies produced an aggregate of 367,274 tons of aluminum ingots during the first seven months of the current Iranian calendar year (March21-October 22, 2022), indicating a 21 percent rise YOY.

During the mentioned period, SALCO has the lion’s share with 157,311 tons of aluminum ingot production followed by IRALCO with 102,441 tons, ALMAHDI with 86,330 tons and Iran Alumina Company with 21,192 tons.

Furthermore, during the period under review, the company’s bauxite production stood at 323,079 tons.

Commodities worth over $485m traded at IME in a week