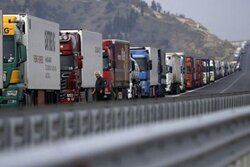 The value of Iran’s exports to neighboring Turkey increased by 24 percent to reach $3.1 billion in the first 11 months of 2022, according to the figures recently released by the Turkish Statistical Institute.

Turkey had imported over $2.5 billion worth of commodities from the Islamic Republic in the first 11 months of 2021.

Based on the mentioned data, Iran’s imports from the country also marked a 12-percent rise to hit $2.78 billion during the January-November period, in comparison with the same time span in 2021, when the figure was $2.49 billion.

According to the Turkish Statistical Institute, the trade between the two countries has registered an 18-percent increase in the said 11 months compared to the same period in the previous year.

The value of trade between the two neighbors reached $5.88 billion in January-November 2022, while the figure stood at $4.99 billion in the previous year’s same time span.

Iran's trade balance with Turkey has been $320 million positive in favor of Iran during the 11 months of 2022.

The latest data released by the European Union's statistics office Eurostat also indicates that Iran exported 8.422 billion cubic meters (bcm) of natural gas to Turkey in the first 11 months of 2022, which show 1.8 percent drop from 8.581 bcm of export in the same period of time in 2021.

In last July, Iran and Turkey discussed ways of expanding economic relations along with political ties in the Turkish-Iranian High-Level Cooperation Council in Tehran.

During the meeting, which was co-chaired by Iranian President Ebrahim Raisi and Turkish President Recep Tayyip Erdogan, the two sides negotiated the extension of the gas export contract between the two sides for the next 25 years.

In the meeting, President Raisi noted that the Islamic Republic of Iran is determined to expand economic relations with neighboring countries.

The president also evaluated Tehran-Ankara ties as positive and progressive, saying that the two countries should pursue appropriate policies to move towards increasing their annual trade exchanges to $30 billion.

On the sidelines of the mentioned meeting, Iranian Energy Minister Ali-Akbar Mehrabian also held talks with Turkish Minister of Energy and Natural Resources Fatih Dönmez in which the two sides exchanged views on cooperation in energy fields.

In this meeting Rasoulian referred to the signing of a memorandum of understanding (MOU) between the two countries on cooperation between SMEs, saying: “President Raisi has emphasized on setting up joint industrial parks in the country’s special economic zones, considering the good infrastructure for setting up such parks in the free and special economic zones and the active presence of economic enterprises in these areas.”