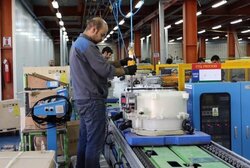 Revival of stagnant production units is one of the best, most suitable and least expensive solutions to increase production and create employment.

Considering that the idle units have gone through a significant part of the production process, such as land acquisition, building construction, infrastructure provision and machinery installation, naturally, providing the required resources and solving some of their problems such as those related to loans and instalments can speed up the job creation process.

In this due, reviving the idle industrial and production units is one of the main industrial approaches of the current government.

As announced by Head of Iran Small Industries and Industrial Parks Organization (ISIPO) Ali Rasoulian, over 2,000 idle units have returned to the production cycle since the current government took office in August 2021.

According to Rasoulian, who is also the deputy industry, mining and trade minister, this approach is very important since the country has been dealing with the most severe international sanctions for many years; and while it relies more than ever on domestic production.

Of course, what is seen as the result of the efforts of the ISIPO, as one of the main organizations in charge of boosting the country's production, planning and diligent follow-up to revive the stagnant production units, fortunately the work in this due is on the right track, the official has stated, highlighting that revival of each stagnant production and industrial unit leads to job creation and return to work of 18 people on average.

The latest data released by the ISIPO head indicate that 1,000 idle industrial production units have been revived in the country since the beginning of the current Iranian calendar year (March 21, 2022).

As previously announced by Rasoulian, 2,067 idle industrial units were revived in the country’s industrial parks and zones during the previous Iranian calendar year 1400.

According to the official, with the reviving of the mentioned units job opportunities were created for over 39,000 people.

“ISIPO had put it on the agenda to revive 2,000 stagnant units inside and outside industrial parks and zones in the previous year and by the end of the year 2,067 idle units returned to the production cycle, which provided employment for more than 39,000 people,” Rasoulian said.

The official noted that 1,433 small workshop units were also established in the mentioned year most of which were the production and knowledge-based units with high technology.

The necessary licenses were also obtained for establishing 26 new industrial parks and zones across the country in the previous year, he added.

He stressed that reviving idle production units is the main approach that the government is currently following in the industry sector.

The government is seriously pursuing its programs to resolve production units' problems in collaboration with the private sector; Very good planning has been done in this regard, Rasoulian said.