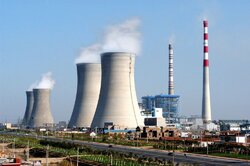 Iran’s thermal power plants generated over 173 million megawatt-hours of electricity since the beginning of the current Iranian calendar year (March 21) up to September 15, registering a nine-percent rise compared to the previous year’s same period.

According to the data provided by the Thermal Power Plants Holding (TPPH), currently, 538 thermal units are active in 129 power plants across the country, IRIB reported.

The total capacity of the country’s thermal power plants currently stands at 69,000 megawatts (MW), of which 46,476 MW or 67 percent is operated by the private sector and the government is in charge of the other 33 percent.

At present, the installed capacity of all power plants in the country, including thermal, hydropower, nuclear, distributed generation, renewable, and diesel, has reached 85,559 MW, of which about 81 percent is accounted by thermal power plants.

“Thermal power plants have tried to stay active for more hours by shortening the time of their periodic repairs and fixing occasional problems in the power plant units, to compensate the electricity generation deficit in the country,” Namazi said.

He further noted that all thermal power plants across the country are currently operating at maximum capacity, and the employees of the country's electricity industry are doing their best to keep the power plants in the grid despite the new wave of coronavirus pandemic and the extreme heat.

In the past decade, constant temperature rising and the significant decrease of rainfalls across Iran have put the country in a hard situation regarding electricity supply during peak consumption periods.
This year, however, new deteriorating factors like severe drought and the decline in the country’s water resources as well as a new wave of illegal cryptocurrency mining across the country have also worsened the situation.

Iran's Power Generation, Distribution, and Transmission Company (known as Tavanir) has previously announced that the company is implementing over 40 different programs for managing the situation and to prevent blackouts in the country, however, so far these programs do not seem to be working as expected.