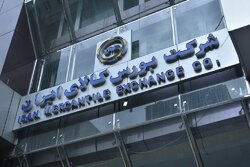 During the past Iranian calendar week (ended on Friday), 1.782 million tons of commodities worth $454 million was traded at Iran Mercantile Exchange (IME).

As reported by the IME’s Public Relations and International Affairs Department, the exchange experienced trade of 1.474 million tons of commodities valued at more than $242 million on its metals and mineral trading floor.

Furthermore, the IME saw trade 387,350 tons of commodities on both domestic and export pits of its oil and petrochemical trading floor valued more than $209 million.

Furthermore, the IME saw on both domestic and export pits of its oil and petrochemical trading floor trade of more than 1.65 million tons of commodities worth $885 million.
The IME's customers purchased on this floor 419,796 tons of bitumen, 328,872 tons of polymeric products, 140,451 tons of chemicals, 13,955 tons of slops wax and 501,000 tons of vacuum bottom.
It's worth noting that the IME's agricultural trading floor played host to trading 1,300 kg of saffron within this month.

Last but not least was the IME's side market which was a platform to trade 30,860 tons of various types of commodities in this month.
The value of trades at Iran Mercantile Exchange in the previous Iranian calendar year (ended on March 20) rose 108 percent compared to the preceding year.

During the past year, about 3.5 quadrillion rials (about $83.5 billion) worth of commodities were traded at the mentioned market.

In the past year, several new records were achieved in terms of the volume and value of transactions in the mentioned market’s various floors including the industrial, petroleum, and petrochemical floors.
IME is one of the four major stock markets of Iran, the other three markets are Tehran Stock Exchange (TSE), Iran's over-the-counter (OTC) market known also as Iran Fara Bourse (IFB), and Iran Energy Exchange (IRENEX).

Commodities worth $400m traded at IME in a week