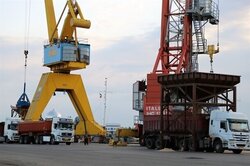 Central Bank of Iran (CBI) allocated $1 billion for the import of basic goods on Saturday, Mostafa Qamari-Vafa, the new head of the CBI’s public relations department, wrote on the social media.

The CBI has supplied $9.5 billion for importing basic goods as well as medicine in the first six months of the current Iranian calendar year (March 21-September 22), another official with the bank has previously announced.

As reported by IRIB, Shiva Raveshi said the government allocated $8 billion for the supply of basic goods and medicine in the current fiscal year’s budget bill, all of which has been supplied in the first half of the year and $1.5 billion has also been supplied for the imports of Covid-19 vaccine.

“The $9.5 billion that has been provided this year is almost equal to the total currency provided for the imports of basic goods in the previous calendar year (ended on March 20); this shows that this year we performed better in terms of meeting the real needs of the country,” she said.

Raveshi pointed to the achievements of the bank despite the difficulties created by the U.S. sanctions, saying: “In the conditions of sanctions and reduction of oil revenues, we were able to meet the basic needs of the country and even the necessary materials for the production units, which is considered a success for the country and shows that the capacity of the country's non-oil exports is increasing.”
Meanwhile, back in September, Mehrdad Jamal Orounaqi, the deputy head of the Islamic Republic of Iran Customs Administration (IRICA) for technical affairs, had said that the clearance of basic commodities from the customs has been expedited.

Start of Tripartite Agreement for Exploration of 400,000 Km2