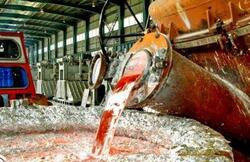 According to the report of public relations of IMIDRO, aluminum ingot production of 4 major Iranian aluminum producer companies stood at 400,481 tonnes during the first nine months of the current Iranian year (March21-December 21, 2021),up %23 YOY.

Moreover, the company’s alumina powder production during the mentioned period stood at 175,284 tonnes registering 1 percent decrease compared with the corresponding period of the last year.