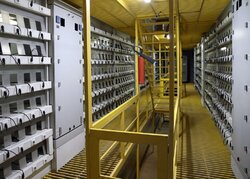 Iranian government is going to pass new regulations to increase the penalties for illegal cryptocurrency mining using subsidized electricity, an official with the country’s Power Generation.

Distribution, and Transmission Company (known as Tavanir) announced.
According to Mohammad Khodadadi Bohlouli, based on the new regulations, the increase in punishments includes rising fines by a minimum of three and a maximum of five times, imprisonment of the offender, and revocation of their business license in case of repeated violations, IRNA reported.
"Any use of subsidized electricity, intended for households, industrial, agricultural and commercial subscribers, for mining cryptocurrency is prohibited,” Khodadadi said.

Misusing subsidized electricity to mine cryptocurrencies reduces the quality of the electricity supply in the national grid and damages peoples’ electrical appliances such as televisions, refrigerators, air conditioners, and so on, the official noted.

Following the Iranian government’s approval of cryptocurrency mining as industrial activity in 2019, numerous companies started mining cryptocurrency across the country thanks to the extremely low-cost electricity, and now Iranian power plants started to see this industry as an opportunity to increase their revenues.

In January 2020, the Ministry of Industry, Mining and Trade issued over 1,000 licenses for cryptocurrency mining units.

In addition to the approved units, some unauthorized miners have also started using household electricity for cryptocurrency mining and this has created major issues for the country’s electricity industry which is already facing serious problems created by drought and reduced rainfall.
Back in May 2021, the Iranian Energy Ministry’s Spokesman for the electricity sector Mostafa Rajabi Mashhadi had said that those cryptocurrency miners, who use subsidized electricity, will have to pay a heavy fine if identified.

In addition to paying the mentioned fines, those miners must also compensate for the damages they cause to the electricity network, Rajabi Mashhadi added.
Unauthorized mining of cryptocurrencies creates problems in supplying electricity due to the damage to the local power grid and transformers, Mashhadi Rajabi noted, adding continued activity of these miners will definitely make the power supply more difficult and there is a possibility of blackouts due to the damage they cause.