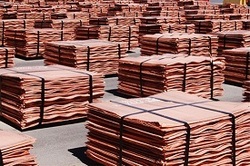 According to the report of public relations of IMIDRO, The latest report of International Copper Study Group (ICSG) indicates that world copper mine production stood at 1,812,000 tons registering 4.5% rise in January 2022.

Global copper producers produced 2,149,000 tons of refined copper during the mentioned period, which indicates a 2 percent growth compared with the corresponding period of the year before.
Likewise, refined copper production capacity of global smelters stood at 2,589,000 tons in January 2022, up 1.6 percent YOY.