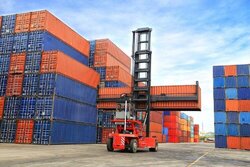 Head of Isfahan Science and Technology Town (ISTT) said knowledge-based companies based in Isfahan Province managed to export $54 million worth of products and services in the previous Iranian calendar year (ended on March 20).

He noted that the export of products and services of Isfahan Province’s knowledge-based companies has increased 10 times compared to the last three years.
Medical equipment, agricultural and livestock machinery, communication, and information technology services, software and equipment, and industrial machinery and components such as high-pressure tanks and compressors are the main data-x-items exported by the mentioned companies, the official said.
The value of export from Isfahan Province rose 56 percent in the past Iranian calendar year compared to the previous year, according to a provincial official.

Rasoul Kouhestani-Pajouh, the director-general of Isfahan Customs Department, announced that 2.151 million tons of products worth $1.355 billion were exported from the province in the past year, indicating also 14 percent growth in terms of weight.

He named iron and steel, petrochemicals, carpets, and dairy products as the major data-x-items exported from the province, and Iraq, Pakistan, Afghanistan, Turkey, and Armenia as the major export destinations in the previous year.
As previously announced by the head of Islamic Republic of Iran’s Customs Administration (IRICA), the value of Iran’s non-oil trade rose 38 percent in the past Iranian calendar year 1400, as compared to its previous year.

Alireza Moqadasi put the country’s non-oil trade at 162 million tons worth $100 billion in the past year.
He said that Iran exported 122 million tons of non-oil products worth $48 billion in the previous year, which was $14 billion (41 percent) more than the figure for the preceding year.

The country's non-oil trade record in 1400 was reached while the toughest sanctions were imposed on Iran, but thanks to God and the efforts of entrepreneurs, producers, and the cooperation of foreign trade-related organizations, a historical record was achieved in the past year which was unprecedented in recent decades, the official underlined.