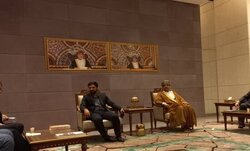 Iranian Trade Promotion Organization (TPO), in collaboration with the Iran-Oman Joint Chamber of Commerce, has sent a trade delegation to Oman as Iranian President Ebrahim Raisi is due to visit the Arab country, the TPO portal reported.

As reported, TPO Head Alireza Peyman-Pak led the 30-member trade-marketing delegation which arrived in Muscat on Monday.
The head of the Export Guarantee Fund of Iran (EGFI) and the deputy head of the Iranian Ports and Maritime Organization (PMO) accompany Peyman-Pak on this trip.
Upon arrival, the Iranian delegation was welcomed by the representative of Oman’s Ministry of Commerce, Industry, and Investment Promotion, and Iranian Ambassador to Muscat Ali Najafi Khoshroudi.
Attending an Iran-Oman business forum, negotiating with Omani trade parties, examining the Arab country’s market and assessing ways of export development, as well as identifying obstacles and operational problems in developing trade relations between the two countries are among the most important goals of this visit.

Meeting with the Omani Minister of Commerce, Industry, and Investment Promotion and the President of the Oman Chamber of Commerce and Industry, attending the opening ceremony of the International Exhibition of Oman Construction Industry (Project Oman 2022) and visiting the Iranian pavilion in this exhibition, meeting with banking, maritime, and transport officials of the Arab nation are also among the programs of the Iranian delegation during their stay in Oman.
Back in February, Iran and Oman signed a memorandum of understanding (MOU) for expanding economic cooperation in a variety of areas at the end of the two countries’ 19th Joint Economic Committee meeting.
The MOU was signed by Iranian Industry, Mining and Trade Minister Reza Fatemi-Amin and Omani Minister of Commerce, Industry, and Investment Promotion Qais bin Mohammed Al Yousef, who co-chaired the joint meeting.

Fatemi-Amin visited Oman’s capital Muscat on top of a high-ranking trade delegation to attend the 19th Iran-Oman Joint Economic Committee meeting which was held during February 8-9.
During his visit, the minister also met Oman's Minister of Foreign Affairs Sayyid Badr Bin Hamad Bin Hamood Al Busaidi to discuss ways for expanding ties between the two countries.
Fatemi-Amin also met with the private sector and political and economic officials of the Kingdom, including the minister of Health, the minister of Economy, Foreign Affairs, Energy, and Minerals and the minister of Transport, Communications and Information Technology of Oman and the heads of Oman’s free and special economic zones to discuss the latest state of economic and trade relations between the two countries.