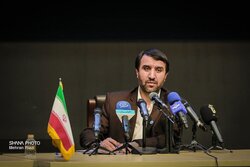 Morteza Shahmirzaei made the remarks in a press conference held on the sidelines of the 26th International Oil, Gas, Refining and Petrochemical Exhibition of Iran (Iran Oil Show 2022) on Monday.
The official said that of the mentioned $15 billion petrchem revenues, over $12.5 billion was injected into the Forex Management Integrated System, locally known as NIMA.
The petrochemical industry plays a crucial role in Iran’s non-oil economy, as the petrochemical export is the second-largest source of revenue for the country after crude oil. Petrochemical exports already constitute nearly 33 percent of the country’s non-oil exports.

The NPC’s managing director further stressed that petrochemical industry is a value and job-creating industry, which has no risk.
The official said that 69 production units (including three service units which provide services such as water, electricity, and steam for the production units) are now active in the petrochemical industry of Iran, which play some significant role in bringing foreign currency for the country.
Annual petchem production capacity reaches 90m tons
Shahmirzaei further announced that the country’s petrochemical production capacity reached 90 million tons in the past year.

He said that the real production is 65 million tons, and the difference between the two figures is due to some reasons, one of them is the overhaul operations of the petrochemical units, which stop their activities, accidents is the other reason which stops the units’ activities, also in the cold seasons, the gas supplied to the industrial units, including the petrochemical ones, is reduced as more gas is supplied to the household sector.
“In line with completing the value chain in the petrochemical industry, that its products are used in almost every sector, we will achieve the annual production capacity of 200 million tons”, the official further underlined.

He also announced that six projects will be implemented this year, adding five million tons to the country’s petrochemical output.
Domestic production should be completely realized in petchem sector
Elsewhere in his remarks, Shahmirzaei stressed that domestic production should be realized in all sectors of the petrochemical industry.
A small part is still remained, so that this target will be achieved, he added.
Petrochemical Research and Technology Company and Research Institute of Petroleum Industry in addition to the other related institutes and centers are taking all efforts in this due, the official added.
He mentioned West Eslam-Abad petrochemical project as one of the projects that all of its parts will be domestically produced.

“We should apply five technical knowledge for this project, which require some special preciseness and effort”, Shahmirzaei noted.
“During a visit to the project last week, I saw that some good steps have been taken in this due”, the NPS’ managing director stated.
It is planned that all catalysts used in the petrochemical industry will be domestically produced by the end of the current government’s incumbency, the official further announced.