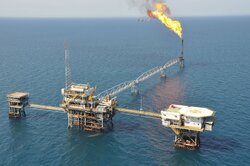 Iran's income from the export of oil, gas, petroleum and petrochemical products has risen 66 percent during the first two months of the current Iranian calendar year (March 21-May 21), as compared to the same period of time in the past year, the director-general of Oil Ministry’s Public Relations Department announced.

Ali Forouzandeh said that with the efforts of Oil Ministry and despite some rumors, the receipt of revenues from the export of oil, gas condensate, natural gas, petroleum products and petrochemical products in the first two months of this year had a staggering increase compared to the same period last year.

Back in January, Head of National Iranian Oil Company (NIOC) Mohsen Khojasteh-Mehr had said the country’s oil revenues had increased significantly over the past few months and the country had received the payment for all its crude oil sales since the new government administration.
“In the thirteenth government, part of the country’s lost oil markets has been revived and we have received the payment for all the oil we have sold so far,” Khojasteh-Mehr said.
According to the official, the private sector is also contributing greatly to the country’s current oil sales.
As previously stated by Oil Minister Javad Oji, the oil industry has brought the country over $43 billion of revenues in the previous Iranian calendar year (ended on March 20).

Meanwhile, in early April the minister said that the country’s crude oil production has reached the pre-sanction level.
Tehran's oil exports have been limited since former U.S. President Donald Trump in 2018 exited the 2015 nuclear accord and reimposed sanctions.
Iran views U.S. sanctions as illegal and has said it will make every effort to sidestep them.
Iran increased exports in 2021 despite the sanctions, according to estimates from oil industry consultants and analysts. But they remained well below the 2.5 million bpd shipped before sanctions were reintroduced.