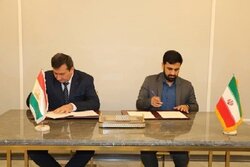 Iran and Tajikistan have signed a memorandum of understanding (MOU) to expand bilateral cooperation in the fields of trade and industry, Mehr News Agency reported.

The MOU was signed at the end of a meeting between the head of Iran’s Trade Promotion Organization (TPO) Alireza Payman-Pak and Tajikistan’s Principal Deputy Minister of Industry and New Technologies Bakhtiyor Sharifi.

Under the framework of the mentioned MOU, the two sides have agreed to strengthen and diversify industrial, mining, and trade cooperation in accordance with their national laws and international obligations.
Also, the two sides agreed on exchanging specialized trade and marketing delegations, especially during specialized exhibitions.
The two sides also reached an agreement on constructing a stone production plant in Tajikistan, developing cooperation in the field of knowledge-based technologies, and reducing tariff duties with the aim of increased bilateral trade, etc.

A Tajik trade delegation, headed by the country’s deputy minister of Industry and New Technologies, arrived in Tehran on Saturday to meet with Iran’s transport officials and discuss the expansion of ties.
Upon arrival, the delegation attended a meeting with Deputy Transport Minister Shahriyar Afandizadeh, during which the two sides conferred on the promotion of bilateral and multilateral transport ties via different transport modes.

They also said that they are determined to increase trade and transit as per mutual interests.
The officials also emphasized the need for using various international corridors in the region, noting that the two countries should advance transit in relations with other involving countries including Turkmenistan and Afghanistan.

Speaking in this meeting, Afandizadeh mentioned Kyrgyzstan-Tajikistan-Afghanistan-Iran (KTAI) and ECO corridors as the most important routes for transit between Iran and Tajikistan, saying that these corridors should be more actively operated.
“Iran is ready for any cooperation in various sectors of transportation, including road, rail, sea, and air,” the deputy minister said.