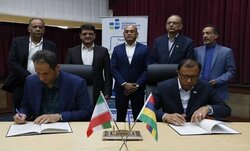 Iran’s Trade Promotion Organization (TPO) has signed a memorandum of understanding (MOU) with Mauritius’ Economic Development Board (EDB) to cooperate on facilitating economic exchanges between the two countries.

As reported, some of the main goals of the mentioned MOU include creating a practical framework for joint cooperation between the two countries in various fields, promotion of investment-making with a focus on sectors such as engineering, agricultural processing, medicine, health care, ports and logistics, information and communication technology, construction, hoteling, education and breeding, industry and cinema, etc.
The MOU is also aimed at promoting mutual trade between the private sectors of the two sides considering the potentials and export capabilities of the parties in the agricultural, industrial, and mineral sectors.

It also emphasizes the exchange of information about export opportunities, resources, incentives, and support services between the two countries, as well as facilitating activities related to information gathering and market research.

Facilitating the formation of joint investment projects between private and public sectors of Mauritius and the Islamic Republic of Iran, technology transfer, and technical knowledge exchange between the two countries, especially in the fields of agriculture, animal husbandry, fisheries, processing of agricultural products, medicine, and medical equipment as well as construction industry were also reported to be among the issues covered in the said MOU.
During the gathering, the two sides underlined the significance of the event as a platform for promoting cooperation between the two countries in the commercial, economic, and tourism sectors and expressed hope that both sides will be able to benefit from each other’s facilities in future collaborations.