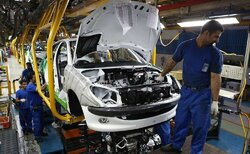 Iranian Industry, Mining, and Trade Minister said on Monday that his ministry currently does not have any plans for the imports of automobiles, IRIB reported.

“The decision for not importing cars was made in [the Iranian calendar year] 1397 (ended on March 20, 2019) when following the U.S. sanctions we faced some problems for providing the foreign currency needed for our imports and as a result, the import of some data-x-items including automobiles was banned,” Seyed Reza Fatemi Amin said.

The official noted that his ministry has two comprehensive programs for the improvement of the country’s auto industry.
“The Industry Ministry has defined two programs including a six-month and a two-year program to develop the country's automobile industry with a focus on domestic capacities.”

A short-term plan is aimed to achieve the goals set for the current fiscal year (ends in March 2022), he said.

"Another plan is to be able to sell 30 percent of domestically produced cars in export markets by the Iranian calendar year 1404 (starts in March 2025), which requires the carmakers to be more competitive," he added.