468 industrial, mining projects to be inaugurated during Ten-Day Dawn 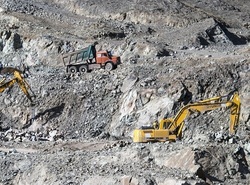 Some 468 industrial and mining projects worth 626 trillion rials (about $2.2 billion) are scheduled to be inaugurated in Iran during the Ten-Day Dawn (February 1-11), which marks the 43rd anniversary of the Islamic Revolution, Deputy Industry, Mining and Trade Minister Mehdi Niazi announced.

According to Niazi, the mentioned projects are going to create direct job opportunities for over 22,800 people across the country, IRNA reported.

Niazi said 172 of the mentioned projects are large-scale industrial and mining projects which will benefit the country at a national level.

Most of the said projects will be put into operation in East Azarbaijan, Khorasan Razavi, Yazd, and Alborz provinces, the official said.

Of the total number of projects ready to be inaugurated, 296 are related to the small and medium-sized enterprises (SMEs) that have been established with a total investment of about 2.6 trillion rials (about $93.1 million) and will create jobs for about 5,800 people, Niazi added.

Every year, during the Ten-Day Dawn celebrations, which mark the victory of the Islamic Revolution in Iran, numerous infrastructure projects are inaugurated or commenced to mark the development of the country after the revolution.

Last week, Transport and Urban Development Ministry had announced the plan for the inauguration of numerous port development, maritime, and transport projects during the Ten-Day Dawn.

Agriculture Ministry also plans to inaugurate 1,969 water and soil preservation projects across the country during the mentioned 10 days.